The use of phased arrays for ultrasonic flaw detection offers a number of advantages.
– Significantly increases the speed of the survey: from 10 to 100 times.
– The probability of error is reduced due to the fact that the transverse shift of the sensor relative to the axis of the weld is excluded.
– The information content and reliability of the control significantly increased due to the small step of scanning, the use of different input angles, as well as the expanded capabilities of equipment for processing and saving scan results. 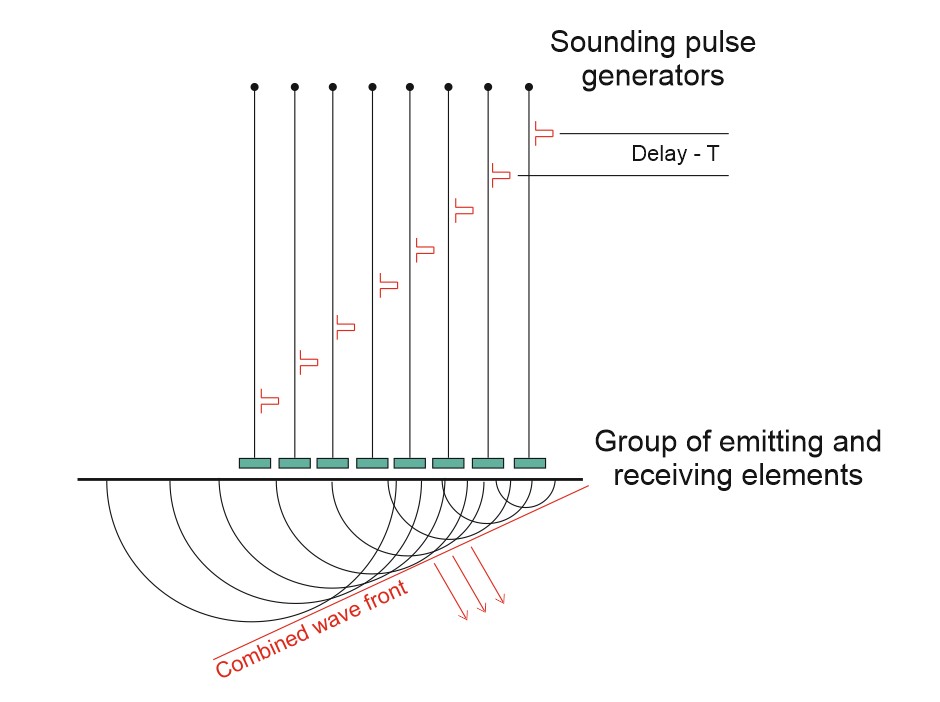 The phased array is a set of piezoelectric elements located on one common substrate. Three types of grids are mainly used: linear, two-dimensional and annular. The most common are linear FA, they are used in more than 99% of cases. The number of elements in such a lattice can be from ten to several hundred. Elements used to emit and/or receive ultrasonic oscillations are called active groups. By changing the number of elements in the active group, user can change the size of the virtual aperture of the virtual probe. With the help of special electronic blocks, the excitation delays of each lattice element can be varied by changing the focusing, the angle of entry and the ultrasonic input point. A similar process occurs when ultrasonic vibrations are received. Such features of phased arrays allow practically any control schemes to be implemented by the software, greatly simplifying the process of mechanical scanning. As with conventional PET, FA monitoring can be performed by shear or longitudinal waves. Control of transverse waves is usually used to control welds, search for vertical cracks, etc. Control by longitudinal waves makes it possible to clearly identify stratification, inclusions, changes in wall thickness, etc.

The phased array system uses the phased wave excitation physics, changing the time between pulses in such a way that the individual wave fronts created by each element in the array interact with each other to increase or decrease energy in certain directions, which allows to effectively control the shape of the sound beam.

Phased arrays are a set of several crystals, structurally combined in one body. The physical principle of the operation of phased arrays in the ultrasonic flaw detector consists in the generation of ultrasonic waves by all crystals, which form an ultrasonic beam in a complex. Electronic control of the angle of input of the ultrasonic beam and the analysis of the reflected echoes allow in real time to generate on the screen of the flaw detector S-scan, in the form of a two-dimensional image of the section.

Thus, the phased array method is a set of A-scans, the number of which depends on the number of transducers. From this set of A-scans, user can later build an S-scan that allows user to visualize the structure of the material.
The phased array method is advanced compared to traditional ultrasonic control (using a single-element converter). Due to the use of multi-element converters, the productivity of control increases, its quality, visibility.

Our company is developing the device of such type, and in the nearest future they will be available.